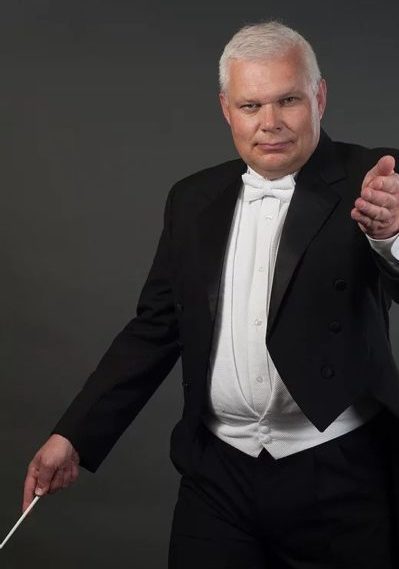 Maestro Peter Dabrowski celebrates 20 years as the Music Director and Conductor of the Valley Symphony Orchestra in the 2020-21 concert season. Over the course of his tenure with the VSO, the orchestra has performed throughout Texas (McAllen, Edinburg, Harlingen, Brownsville, South Padre Island) and in Reynosa, Mexico. Most recently, Maestro Dabrowski has led the orchestra in making a new artistic home at the McAllen Performing Arts Center, which is acoustically tuned specifically to the requirements of the VSO. Dabrowski recognizes the founding of the annual VSO Educational Concerts as one of his most significant achievements, which have introduced nearly 200,000 pre-college students to live orchestral performances. A native of Warsaw, Poland, Dabrowski is Professor of Music and Associate Dean of the College of Fine Arts at the University of Texas Rio Grande Valley.

​Dabrowski studied conducting and piano at the Warsaw Music Conservatory in Poland and Northwestern University in Evanston, Illinois where he received masters and doctoral degrees. He has also participated in prestigious conducting courses at the Tanglewood Music Center, the Aspen Music Festival and in Budapest and Miskolc, Hungary. Among conducting mentors, Dabrowski credits Maestro Yuri Simonov of the Moscow Philharmonic Orchestra for having the most profound influence on his craft.

​Maestro Dabrowski’s artistry has been recognized by the Moscow International Music Festival and the Cross Drumming Festival in Warsaw. He has also received special acknowledgments from the Cities of McAllen and Edinburg as well as a place on the City of Hidalgo’s Rio Grande Valley Walk of Fame. He has been lauded for the Promotion of Mexican Music by the Mexican Consulate in McAllen and by the University of Texas-Pan American as a Distinguished Faculty.

Dr. Seale will be remembered for his tireless efforts to further music education and classical music in the Rio Grande Valley. Throughout his professional life, he maintained an interest in the music programs of the public schools of the Valley, with warm friendships with teachers, many of whom remain faithful symphony members today.

In the 1980s, Dr. Seale was appointed by Governor Dolph Briscoe to the Good Neighbor Commission, which promoted activities between Mexico and Texas. The Valley Symphony Orchestra was able to tour the neighboring states of Nuevo Leon and Tamaulipas. Seale provided programs for cultural groups and aided in the start-up of music education programs in Reynosa. He also guest-conducted Mexican orchestras in Guanajuato, Salamanca, Leon, Saltillo, and Monterrey.

Professor Emeritus of the Department of Music at the University of Texas-Pan American, Dr. Seale taught various courses for 30 years, serving for eight years as department chair.

A prolific composer all his adult life, Seale’s output was large and varied, with ballets, operas, oratorios, concert works for band and orchestra, and pieces for individual instruments.  He especially enjoyed collaborating with other Valley artists in dramatic, visual art, and dance presentations. Many of his works were composed for Valley entities. His music is preserved in the Special Collections Library at the University of Texas-Rio Grande Valley.

Dr. Christopher Munn served as conductor of the Valley Symphony Chorale from 1985 through 2013.  During that time, the Chorale grew to more than 100 members and twice performed in New York’s Carnegie Hall.  During his tenure, the Chorale performed such works as the Verdi Requiem and the Brahms Ein deutsches Requiem, as well as diverse works such as J.S. Bach’s Christmas Oratorio, Vaughan Williams’ A Sea Symphony, and Stravinsky’s Symphony of Psalms.  Handel’s Messiah and Orff’s Carmina Burana became frequent audience favorites.

Munn retired as Full Professor, Emeritus, at The University of Texas-Pan American in 2013, where he taught for 29 years.  There, he conducted the University Choir and taught courses in Music History and Music Literature, Music Theory, Conducting, Research and Bibliography, several graduate courses, and supervised student teachers.  A master teacher, he was particularly known for his ability to teach difficult music.

Munn is an expert in the historical performance practices of early music, specializing in performance treatises from 1500 to 1800.  As a harpsichordist, he has appeared in performances with such famous musicians as Christopher Hogwood and Nigel Rogers.  He has made both research and performance presentations at many professional meetings.

Munn has adjudicated numerous competitions at the state and national levels and continues to be actively involved throughout this area in the activities of the Texas Music Educators Association and the Texas University Interscholastic League, through choir clinics, accompanying band, choir, and orchestra soloists and ensembles, and adjudication.